In the previous blog post I talked you through how to get up and running with Azure’s Machine Learning platform which massively simplifies the creation of ML models and allows you to deploy them to an API at the click of a button. To finish this series off I will demonstrate how you can repurpose the example computer vision model to classify anything you want! In my case I wanted to see if DenseNet could learn to understand human emotion.

Computer vision has very many practical use-cases relating to the recognition of human faces and what we are communicating with them, using such technology you no longer require a password to unlock your phone, intelligence agencies can find wanted criminals, and transportation companies can verify that the person driving your train hasn’t fallen asleep on the job. Another branch of facial recognition is emotion recognition, what benefits this technology would provide are still up for debate but they range from early detection of mental illnesses to enhancing the emotional intelligence of Apple products. I thought it would be a fun experiment to see how easy it is to repurpose the Azure ML template which is currently identifying animals (dogs, cats, and frogs) to recognise human emotion instead.

This relies on a concept called Transfer Learning, the basis of this technique is that there is a certain amount of knowledge which is transferable, for example: if you have learnt how to play guitar then it is easier to learn how to play other stringed instruments. This concept also applies to deep learning models, if our model has been trained to recognise animals, then maybe it can also recognise human faces – and perhaps the emotions that they are communicating.

The model we’re using is called DenseNet, it’s a deep learning algorithm characterised by its densely connected layers, but what’s more important is that Azure ML gives us the option to pre-train the DenseNet model shown here: 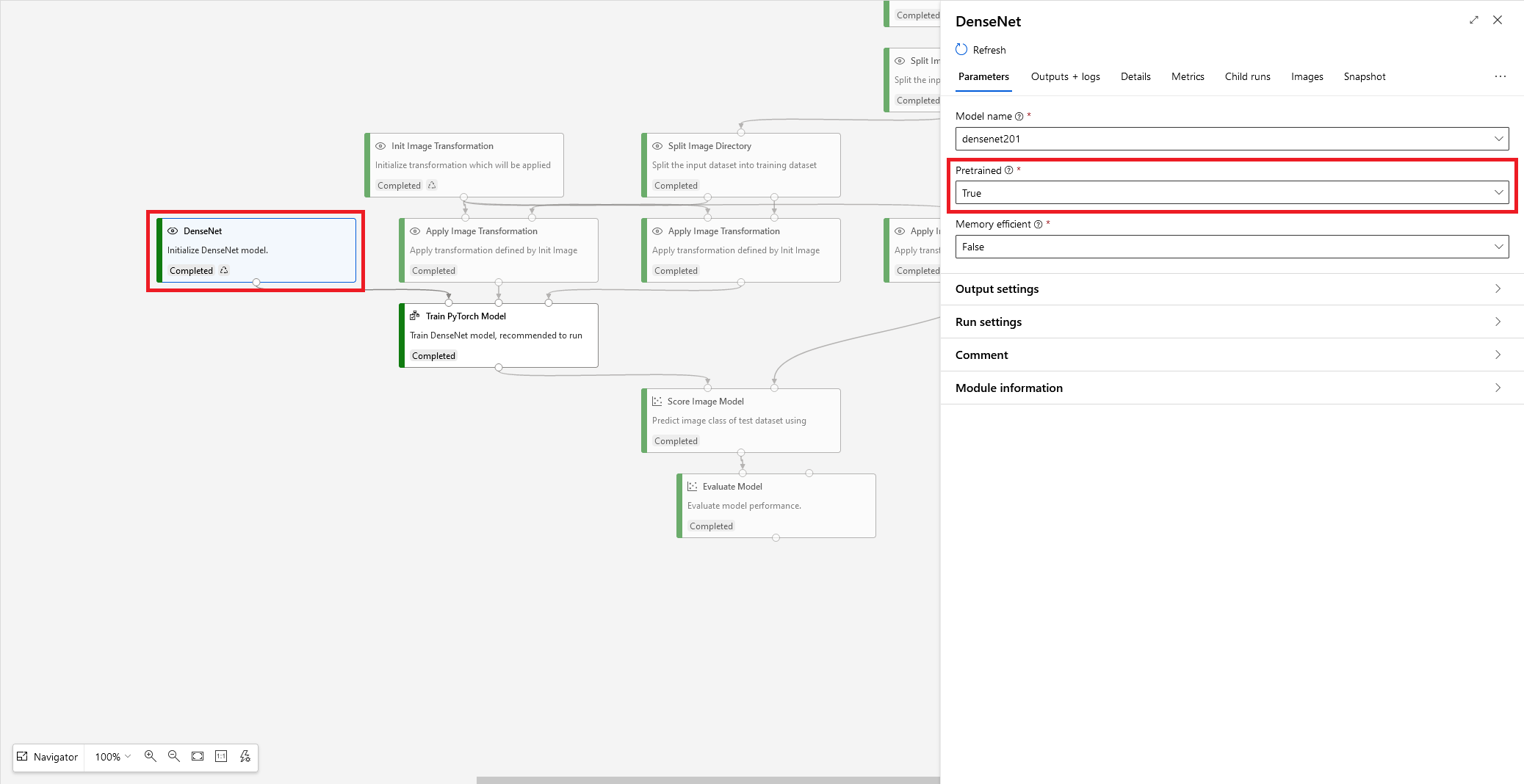 Reading the Azure documentation for this module we find that this provides us with a version of DenseNet which has been trained on ImageNet, a database containing over fourteen-million labelled images. What happens when we use this pre-trained network is the weights of the whole network are frozen except for the final output layer, i.e. the network retains the knowledge from the database of fourteen-million images, but we tune the final layer to make predictions on our own dataset. So, which dataset should we use?

Facial Expression Recognition 2013, or Fer2013, is a dataset containing images of faces displaying various emotions, happiness, sadness, surprise, etc, it’s a publicly available dataset and I will share a copy here if you would like to follow along: this is a modified version of the original dataset, I have used a process called image augmentation to make the dataset balanced. In its original form there are many more examples of happy, shown below, than any other emotion and it’s a principle of machine learning to balance the classes within your dataset to reduce bias and improve model accuracy. To do this I took images from the underrepresented classes, applied a random sequence of modifications to the image (mirror image, rotation, adding noise, etc.), and saved those augmented images until there are an equal amount of every class. This process achieves class balance whilst also avoiding the problems associated with simply duplicating images which can also result in model bias. The notebook I used to perform the image augmentation can be found here. Below you can see the distribution of classes, there are less than 1000 disgusted samples and over 8000 happy samples – if we left this be then obviously our model would do a bad job of recognising disgusted faces! 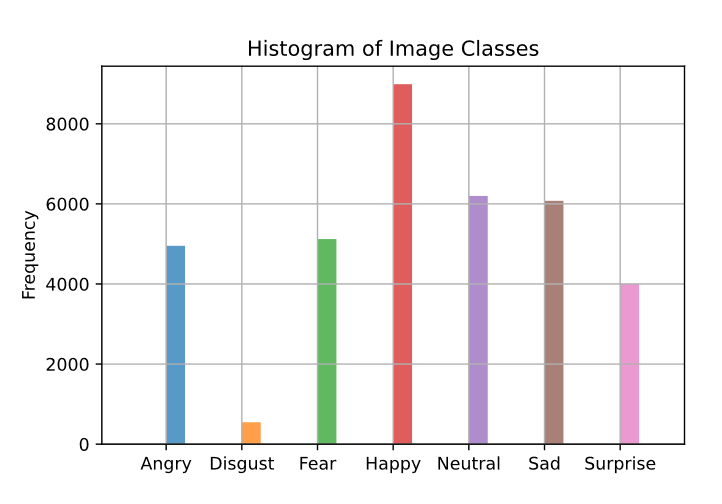 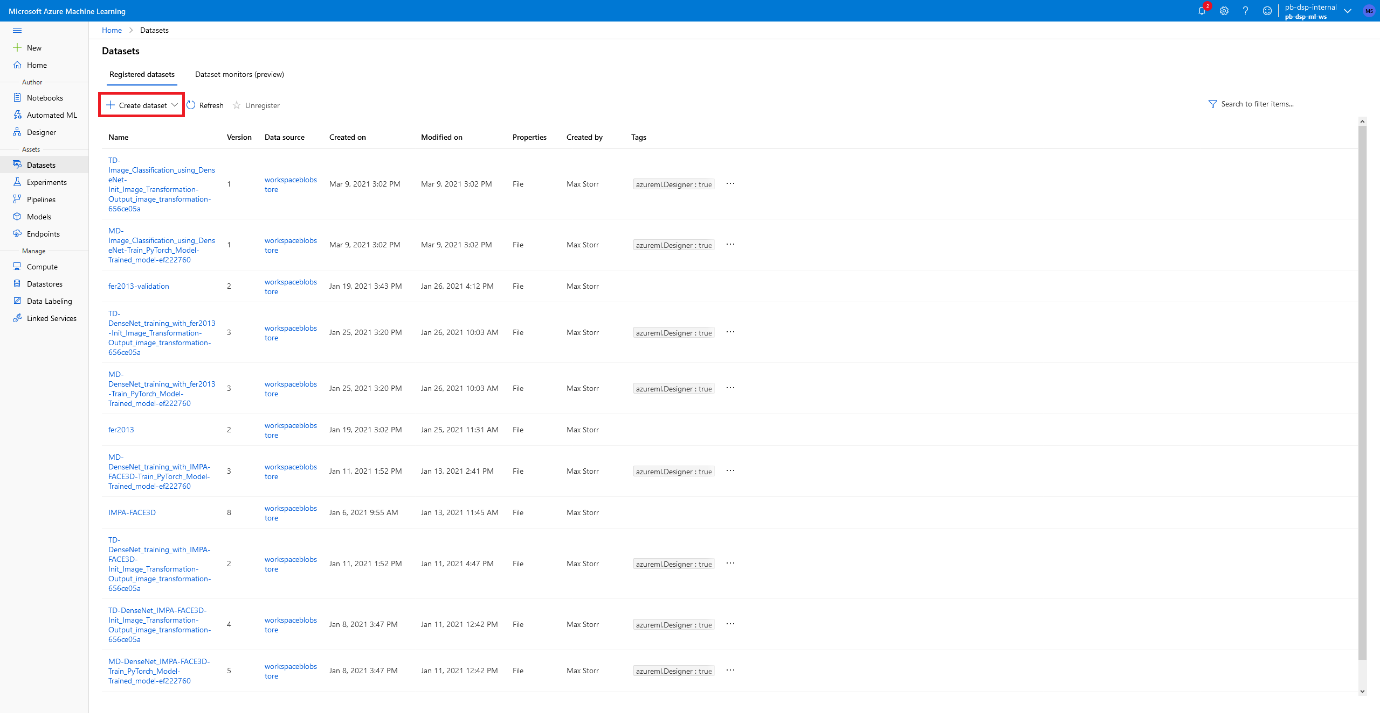 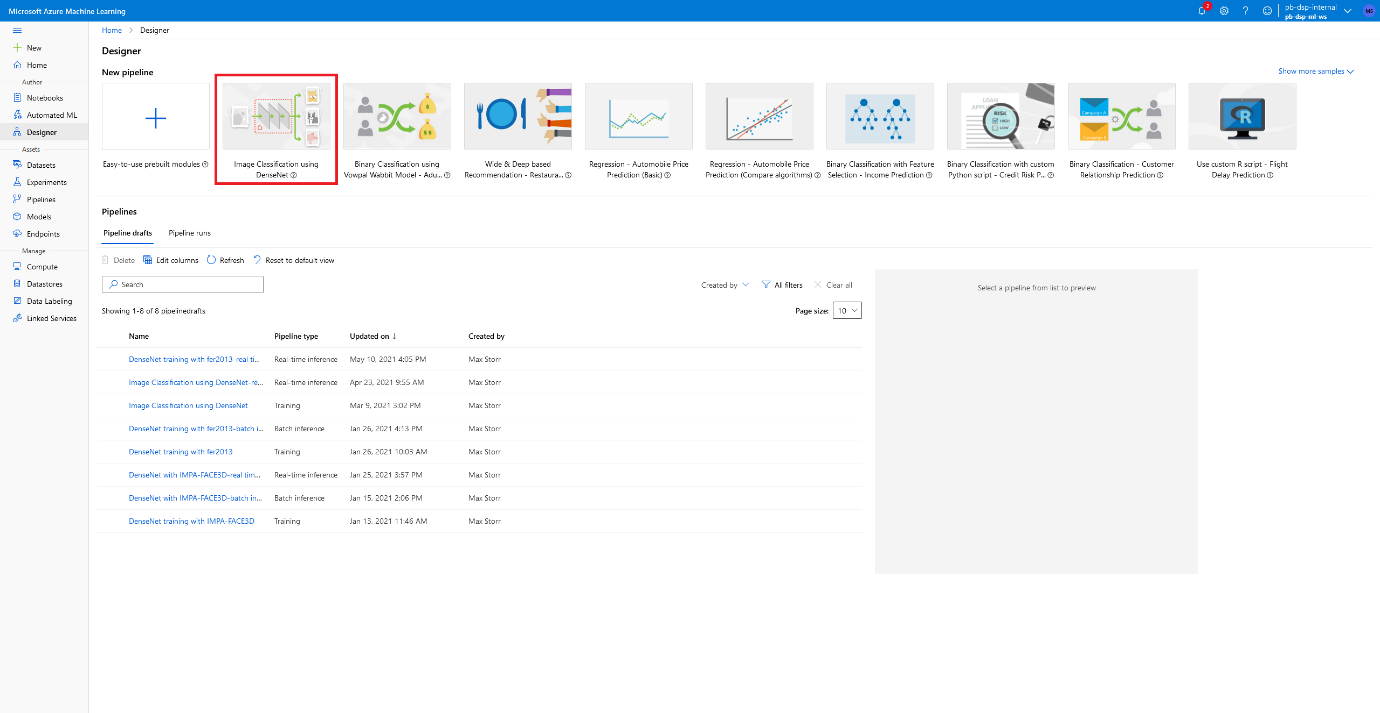 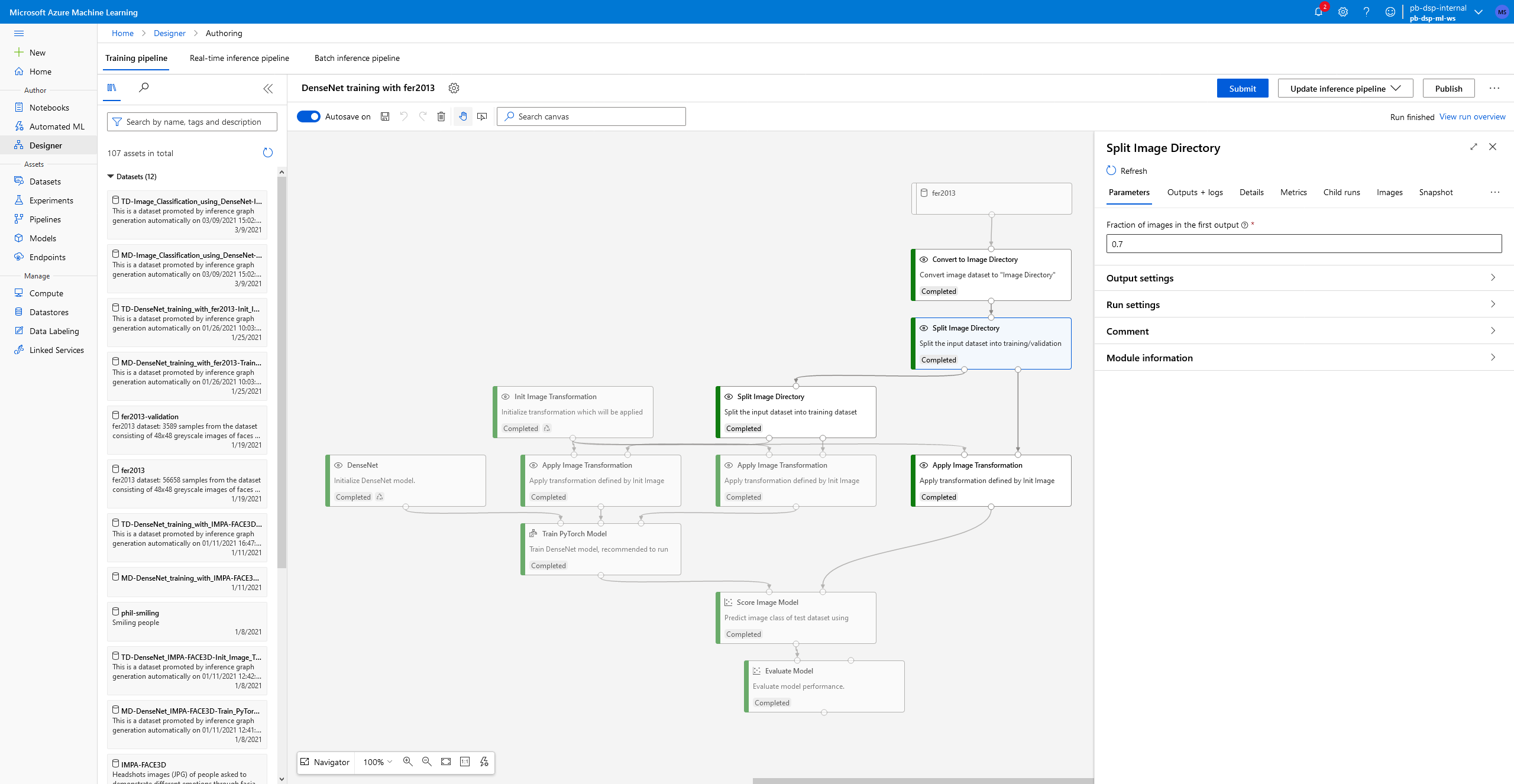 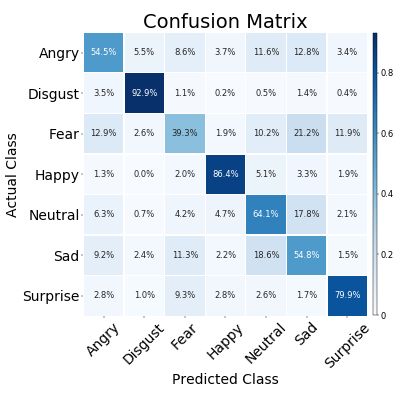 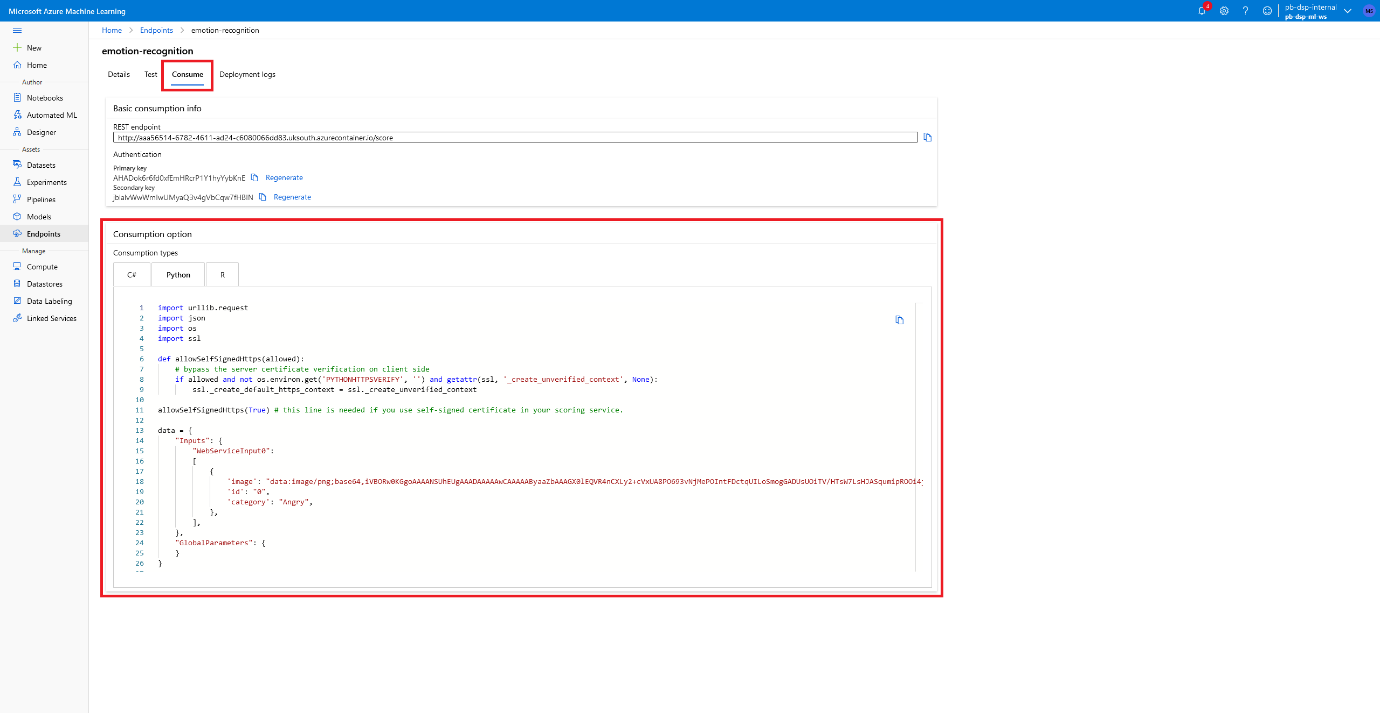 Copy and paste this into your favourite text editor or IDE, make sure to save it as a .py file or the extension that corresponds to your stub of choice, and we can start making this easier to use by adding some code to read an image from our computer and convert it to base64 so it can be added to the API request. I’ve used Python’s base64 library to do this and added the following lines below the imports:

# Read and base64 encode image

We can then change the data variable to include our img_b64 variable, like so:

Alternatively if you just want to download the python notebook to make the request it can be found here. You then need to modify the URL and API key in your own stub, and this will be unique to your API. Running the code will now provide you with your classification, here’s an example where I uploaded an image of myself and retrieved the class scores from my model! The scored label is ‘Happy’, so it’s made the correct prediction! Although it also thought I looked a little sad! Maybe I need to work on my smile a bit 😊 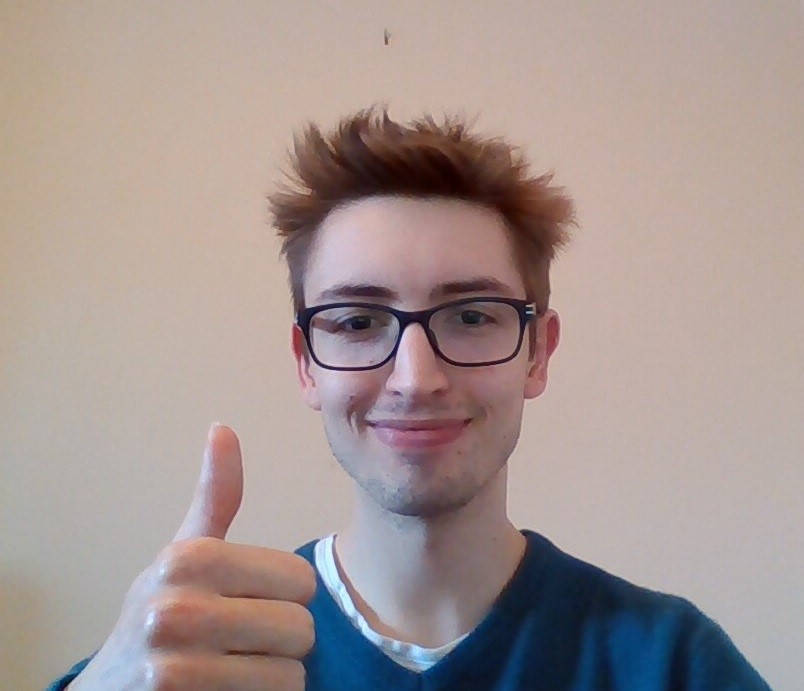