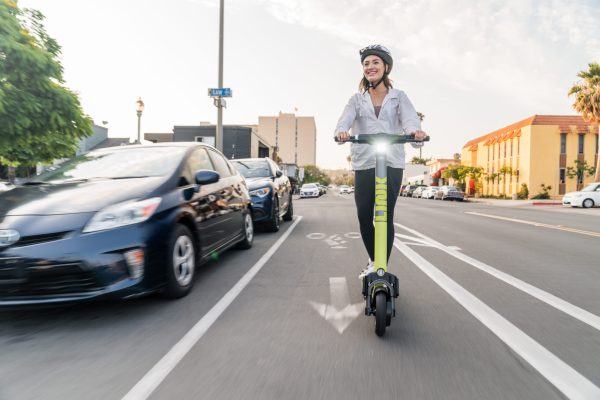 Shared e-scooter company Superpedestrian is gearing up to deploy its Pedestrian Defense safety system at scale, a feature that allows the company’s e-scooters to detect and correct unsafe riding behaviors, like riding on sidewalks or the wrong way down a one-way street, in real time. Superpedestrian aims to build and roll out new scooters equipped with Pedestrian Defense to 25 cities across the United States and Europe this year, with the initial deployments beginning in the U.S. and the United Kingdom in pedestrian-dense cities by early spring, according to the company.

This will be the first time Superpedestrian is bringing its new technology to market since the company acquired Navmatic, a startup that used precise GPS positioning to help micromobility operators locate vehicles and correct movements in real time, last July. The purchase enabled Superpedestrian to integrate Navmatic’s software with its own onboard Vehicle Intelligence safety system, a combination of AI, sensors and microprocessors, in order to provide a safety feature that would control for many unsafe riding behavior, including one of the things cities hate the most: sidewalk riding.

“Even in cities like New York or Chicago that haven’t traditionally been walking cities, everyone now understands the primacy of the pedestrian,” Paul White, senior director of public affairs at Superpedestrian, told TechCrunch. “So, those cities and others are saying, we want to have a zero tolerance approach to sidewalk riding. It’s not enough just to know with a relative amount of certainty that the scooter is on the sidewalk. We really want to see the intervention and the control to keep the scooters where they belong.”

While many of the cities where Superpedestrian will deploy its new safety system are existing partners, several are new partners that the company has either won over or expects to win over, particularly as city requests for proposal are starting to require companies to deploy tech that protects pedestrians on the road, according to White. For example, two of the cities Superpedestrian is currently competing for, San Diego and Chicago, are transitioning from open to restricted markets with fewer operators, and both have made anti-sidewalk riding capability a big part of their criteria, said White.

Both the update of the current fleet and the expansion into new markets are made possible by the closing of a $125 million Series C round, which consists of both equity and debt. The investment comes from Jefferies, Antara Capital, the Sony Innovation Fund by IGV and FM Capital alongside existing backers like Spark Capital, General Catalyst and Citi via the Citi Impact Fund. Superpedestrian would not share the terms of the debt agreement, nor which investors contributed to equity versus debt.

The Series C is the largest round Superpedestrian has raised to date after its last venture raise of $60 million in December 2020. The money will also be used to boost the company’s R&D on the wider applications of its Vehicle Intelligence software stack, of which it has received interest from other transportation companies like those that operate small delivery vehicle fleets, says White.

“The capability is super interesting, not just for the scooter business, which is really about working with cities, but the capability is relevant to any small vehicle that operates in a dense, pedestrian-rich environment where having that sort of granular level of human scale controls means you’re not marring the pedestrian experience,” said White. “I think that’s another reason why we saw a lot of participation and interest in this round, not just because what the technology does for our core scooter business, but its relevance to any small electric fleet that’s going to grapple with the same challenges or not blocking the bike lane or intruding on valuable pedestrian space.”